Diptic PDQ is an evolution of Peak Systems’ popular iOS photography app Diptic. Over time Diptic has become a very powerful app with a lot of great features, but along the way we lost a core simplicity and focus. Without taking away the options our users love, we built on we’ve learned of how people use Diptic and the way they take and share photos with their phones to create a streamlined, focused experience in PDQ.

One of the greatest things about the iPhone as a camera is the speed and convenience, so we wanted an app that would be fast and simple to use on the go. At the same time, a big part of what people love about Diptic is the ability to share their photos creatively to create something interesting and personal, so it was important to keep that freedom of expression. So the guiding vision for the design became the idea of presenting a powerful but limited set of options in the simplest way possible. A diptic is made up of photos and layouts, so you can see all the photos you want to use, and all the layouts you might want to try, together on one screen and you can quickly try out lots of different combinations and options until you’re happy with the result.

The process of designing PDQ began with the idea to find a new approach to the task of selecting photos and layouts. We analyzed usage data collected from Diptic, along with observation and conversations with to identify typical paths users take through the app, and looked for opportunities to make them faster and more engaging. We also used the data to identify core features that were most used and thus, most important to have in a fully-functional app. 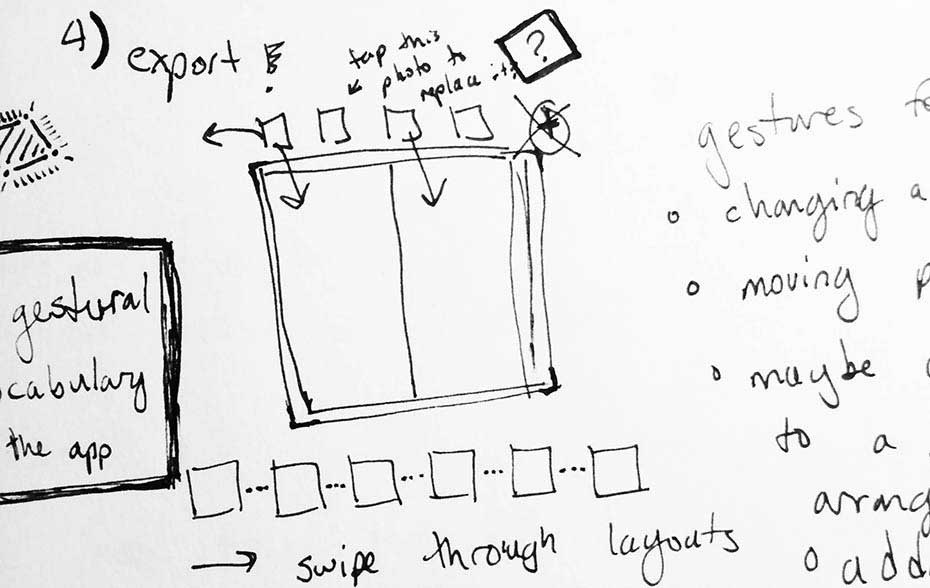 Armed with data, I sketched out possibilities and when satisfied with a solid idea, fleshed out the layouts and interactions more fully in low-fidelity wireframes. From there we iterated on prototypes of the app, testing the functionality, observing users, and refining all the details.

Diptic PDQ launched with the release of iOS7, and was featured in the App Store as one of the best new apps designed for iOS7.